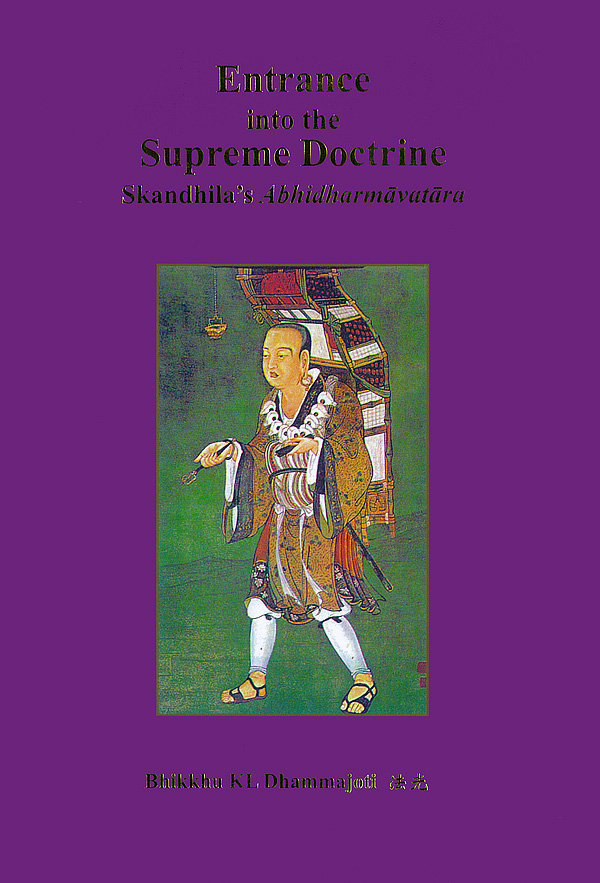 Entrance Into the Supreme Doctrine. 2nd revised edition. Published by the Centre of Buddhist Studies, The University of Hong Kong. (Hong Kong, May, 2008).

Chapter 1: Abhidharmāvatāra as a Sarvāstivāda manual

Through the pioneering efforts of the Japanese and western scholars like C. Akanuma, T. Kimura, Th. Stcherbatsky and Louis de la Vallée Poussin, the importance of the study of Northern Buddhism has been acknowledged by most scholars. Today, no serious researcher wishing to have an adequate understanding of “early” Buddhism can afford to ignore the valuable data embodied in the Northern Buddhist literature, which are parallel to those in the Pāli Canon.

But advance in such studies has remained very slow, not least because of the fact that very little of the original material is preserved in Sanskrit. Fortunately, we possess Chinese translations of all the seven abhidharma texts of the Sarvāstivāda and many other works of the Northern Schools.

One canonical abhidharma text — Prajñāpti-śāstra — and several important Indian commentaries are also preserved in Tibetan3. But these must remain barred to those not versed in the two classical languages. To date, only a very small number of these Chinese and Tibetan texts have been translated into modern European languages. L.V. Poussin’s monumental French translation of Abhidharmakośa-bhāṣya in six volumes, “Documents d’Abhidharma”, and the beginning portions of the Vijñānakāya-śāstra, and E. Lamotte’s Le Traité de l’Acte de Vasubandhu,5 etc., are, in this regard, highly appreciated. In English, the great scholar Th. Stcherbatsky has given his Soul Theory of the Buddhists which is a translation of the ninth chapter of the AKB,
and a partial translation of the argument on Sarvāstivāda in Central Conception of Buddhism and the Meaning of the Word “Dharma”. It is only quite recently that we have the following handful of welcome translations from the primary sources preserved in Chinese: (1) Charles Willemen’s The Essence of Metaphysics: Abhidharmahṛdaya (1975);6 (2) Van Den Broeck’s La Saveur de L’Immortel (*Amṛtarasa-śāstra) (1977); (3) Van’s Le Traité de la Descente dans la Profonde Loi De L’Arhat Skandhila (1977); (4) I. Armelin’s Le Coeur de la Loi Supreme (1978); (5) Collet Cox’s partial translation (1983) of chapter two of Saṃghabhadra’s *Nyāyānusāra, and (6) Leo Pruden’s English translation of the AKB(F) (1990) and (7) Baert Dessin’s translation of the Saṃyuktābhidharmahṛdaya (1999).7 Vasubandhu’s AKB, valuable as it is as a masterly manual of abhidharma doctrines, is encyclopaedic in scope and contains many obscure polemics the understanding of which presupposes a fairly good background knowledge of early Buddhist sectarian views. As such, it is difficult to understand even with its admirably lucid translation into French and English. As Skandhila puts it, “the terms and meanings in the abhidharma, [are bewildering as] a dense forest (gahana)”, and beginners are apt to get frustrated with them. What we desperately need, then, is an English translation of an abhidharma manual which adequately summarizes the whole of the Sarvāstivāda doctrines in reasonably simple but accurate terms. Abhidharmāvatāra appears to have such merits. Besides, its presentation parallels that of the AKB to which therefore it can serve also as an excellent introduction. It is perhaps for this reason that L.V. Poussin has wrongly included this work as a commentary on the AKB. This work, extant now in Chinese9 and Tibetan10 translations (and a fragmentary one in Tokharian)11 is an excellent compendium of the Sarvāstivāda Abhidharma. In a scheme of eight padārtha-s — five skandha-s and the three asaṃskṛta-s [p.15] — it succinctly12 summarizes practically all the important abhidharma categories of the school. In the concluding remarks, the author declares his own attitude in the work: In order to encourage the beginners (ādi-karmika) to take a keen interest in their studies, this treatise has been composed succinctly, without the [usual] questions and answers [which characterize doctrinal disputations].

Those who have not mastered (parijñāta) the profound characteristics of the abhidharma, have indulged in compiling various conceptual proliferations (prapañca). These they put forward, fabricating objections, with the evil intention of slandering one another. [In doing so], they are in fact slandering the Buddha’s teachings (āptāgama).

Indeed, throughout this short treatise, there is no evidence of any hostility on the part of the author towards others holding views different from his. Nevertheless, we do find an instance of mild criticism apparently directed at the Sautrāntika-Dārṣṭāntika. Here he calls those denying the reality, partially or completely, of the caitta-s, “persons of lesser intelligence” and“deluded”.